Legal Abbreviations Every Lawyer Should Know 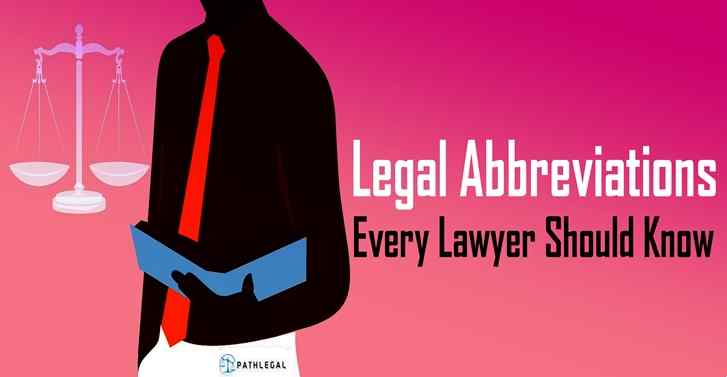 The first week of law practice can be pretty overpowering with colleagues that are more like your competitors than your companions, scary Judge that may call on you at any minute, new schedules to remember, and more reading than youâve ever had in your life. One thing that you shouldnât be anxious about is the numerous acronyms and abbreviations they may sound deep, but they are just shortcuts. Below mentioned are some of them you need to know.

A.G. - Attorney General. Attorney-general is the main legal advisor to the government.

ABA - The American Bar Association is a voluntary association of lawyers who oversee law school accreditation, among other important activities.

C.J.I - Chief Justice of India is the head of the judiciary of India and the Supreme Court of India.

COFEPOSA - Conservation of Foreign Exchange and Prevention of Smuggling Activities Act is an Indian law passed in 1974 trying to retain foreign currency and prevent smuggling.

JMOL - Judgment as a matter of law, JNOV â Judgment notwithstanding verdict

LLC - Limited Liability Company is a type of legal business entity that was developed to provide business owners with a lower level of liability.

LL.D. - Legum Doctor is the doctorate-level academic degree in law

MOU - Memorandum of Understanding (MOU or MoU) is a formal agreement between two or more parties.

NDA - Non-Disclosure Agreement also known as a confidentiality agreement is a legal contract between at least two parties that outlines confidential material, knowledge, or information that the parties wish to share with one another for certain purposes, but wish to restrict access to or by third parties.

NOC- Non - Objection Certificate is a type of legal certificate issued by any agency, organization, and institute or, in certain cases, an individual.